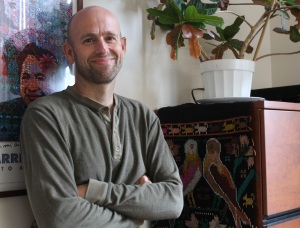 The win last year was a game-changer. Thanks to a class-action lawsuit brought by several public interest attorneys, a federal judge ruled that immigrants with mental disabilities facing deportation proceedings are entitled to a lawyer, a first-ever affirmation of the right to appointed counsel for immigrant detainees.

One of the lead attorneys was Matthew Adams, legal director at the Northwest Immigrant Rights Project (NWIRP) in Seattle and a member of the King County Public Defense Advisory Board. He’s now about to receive the Washington State Bar Association’s Award of Merit – its highest honor – at WSBA’s annual dinner in Seattle on Sept. 29.

The case – Franco-Gonzalez v. Holder – was filed in 2010 by Jose Antonio Franco-Gonzalez, a Mexican immigrant with cognitive disabilities who spent nearly five years detained in a federal immigration facility without an attorney or a hearing. Lacking a court-appointed attorney, Adams said, Franco-Gonzalez would have had to represent himself against a federal prosecutor in an area of law considered second only to the IRS code in complexity.

Shortly after the case was filed, the court certified a class, and Adams was co-counsel on a team representing some 200 immigrants in Arizona, California, and Washington with mental or psychological disabilities who did not have the right to appointed counsel. Others on the team included the ACLU of Southern California, ACLU’s Immigrants’ Rights Project, and Public Counsel.

In 2013, U.S. District Judge Dolly Gee – noting that appointed counsel was the only way members of the class could defend themselves – ruled in favor of the detainees. The Obama Administration chose not to appeal, and last year the court granted final approval of the partial settlement.

As a result, the cases of several class members who had been ordered deported have been reopened. What’s more, federal officials are now implementing a new policy nationwide guaranteeing legal counsel to immigrant detainees who can’t represent themselves because of severe mental disorders or disabilities.

Adams, a lean, soft-spoken man who has worked on immigration issues for the NWIRP for 18 years, ever since he graduated from Berkeley Law School, said he’s pleased by the WSBA award because it will “bring attention to an ongoing need.”

“There are 1,500 people locked up in Tacoma,” Adams said, referring to the Northwest Detention Center, a controversial prison run by a for-profit entity. “And 80 to 90 percent of them are unrepresented. It’s a huge need. We’re talking about people – every single one of them – who have to go up against a federal prosecutor. Some are being returned to countries where they experienced persecution and torture. Some are being torn from their families.”

Lorinda Youngcourt, director of the King County Department of Public Defense, said WSBA made an excellent choice when it decided to honor Adams with its highest award of the year. Thanks to Adams and his colleagues, she said, federal immigration policy has reached a milestone.

“Some of our nation’s most vulnerable people will now get the right to counsel as a result of this lawsuit,” she said. “This is an extension not only of legal rights, but also of human rights. Matt and his colleagues have made a huge difference, and I’m thrilled he’ll have his moment in the spotlight.”

Adams, meanwhile, says the fight for immigrant justice is far from over. “There’s so much at stake, and so much more that needs to happen.”